Grange releases “The Early Granges of New York State: The First 10 Years” as an exclusive e-book to the Amazon Kindle Store 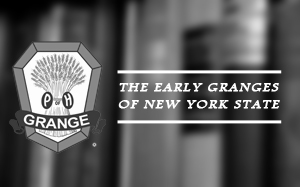 Originally published in 1992, the book documents the difficulty the Granges in New York State faced during their first 10 years.

“William Benson has written a phenomenal account of the hardships these Granges in New York were presented with,” National Grange President Ed Luttrell said Thursday. “By utilizing member accounts and written works of that time, Mr. Benson paints a vivid picture of how many of these Granges struggled, yet ultimately succeeded due to hard work and perseverance.”

Luttrell said the book is as important as it ever was because the lessons learned by those Granges are still valuable today.

“The good times and the bad, the challenges faced, the successes and failures, everything the members faced, is recounted. “Luttrell said. “Most of this story is told through the words of the officers and delegates at the annual State Sessions during those years. Everything feels genuine.”

The National Grange has signed a 90-day exclusivity deal for “The Early Granges of New York State: The First 10 Years” with Amazon and the Amazon Kindle Store. The e-book will be added to the Barnes and Noble Nook Store after the exclusivity deal expires.

This is the thirteenth e-book the National Grange has released. Previous releases include “Mentor in the Grange,” “Semi-Centennial History of the Patrons of Husbandry,” “Origin and Progress of the Order of the Patrons of Husbandry in the United States,” “Agriculture and Progress: The Farmers Great Awakening,” “The Granger Movement in New England,” “Friend of the Farmer,” “Legal and Economic Influence of the Grange,” “Notes and Quotes,” “Proud Heritage,” “First Century of Service,” “People, Pride and Progress,” and the “2014 National Grange Digest of Laws.”

“These books tell a very interesting history of the American people, spirit and culture,” Luttrell said.

Luttrell said the organization continues to seek treasures like Benson’s book that tell the story of the Grange in communities and states throughout the nation as it prepares to celebrate its 150 anniversary in 2017. Any authors wishing to share their work with the Grange should contact National Grange Communications Director Amanda Leigh Brozana by email at [email protected] or by calling (888) 4-GRANGE ext. 102.

Established in 1867, The National Grange, a nonpartisan, nonprofit fraternal organization, is the oldest agricultural and rural community service organization. With more than 2,100 local chapters, the Grange has evolved into the nation’s leading rural advocacy organization and a major benefactor to local communities. There are more than 160,000 members across the United States.